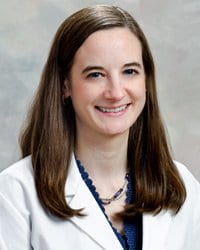 “My job is immensely satisfying. I help teach people who they are.” Every day at work, Teresa Jensen, MD, uses the philosophical formation she received from Franciscan University (BA ’02, MA ’03) as she serves patients at the Order of St. Francis Medical Center in Peoria, Illinois, in pediatrics and internal medicine. Ever since she was 12 years old, she knew she wanted to be a doctor, but a master’s degree in philosophy was not originally part of the plan that culminated with four years of medical school at Loyola University Chicago Stritch School of Medicine.Growing up, Jensen saw firsthand how the culture influenced medical professionals to view patients as cases rather than people. Part of this realization came from having a brother with Down Syndrome.She knew she needed to ground her view of the human person in a strong moral foundation, so she went to Franciscan University in pursuit of an undergraduate degree in biology in the pre-med professional program with a minor in theology. To make her education well rounded, she participated in the Great Books Honors Program.She wanted to dive right into medical school, but during her senior year she quickly concluded that she would be “getting in over her head” without first learning how to think well in complicated situations according to Catholic principles. This prompted her to stay an extra 18 months at Franciscan to earn her master’s degree in philosophy before entering medical school.Dr. John Crosby helped her design a graduate philosophy program that centered on bioethics and personalism, which examines the person as a cohesive whole.

“One of the most important things I learned in this program was not just how to think well but how to listen well,” she says. When a patient disagrees with her, Jensen will say, “Tell me your thoughts about the issue.” Even if she and the patient never end up on the same page, she says, they are usually able to come to an understanding. “People are more receptive to Catholic views on controversial issues, like contraception, when you use this approach,” she says.

Jensen is grateful for her education at Franciscan because it enables her to help patients achieve “a holistic view of themselves.” From helping patients overcome addictions and anxiety to informing mothers about breastfeeding, Jensen leads people to what is truly good for them.

Whether she is teaching residents, staff, or her patients, Jensen keeps two things in mind: “First, the brokenness of our humanity, which sets us up for disease and self-destructive vice, set in relief against God’s ultimate desire for us to be whole, healed, and fully human as he has revealed this to be in Christ,” she says, “and second, that the human person desires and responds to truth, presented in a way that is suited to that individual’s readiness.”